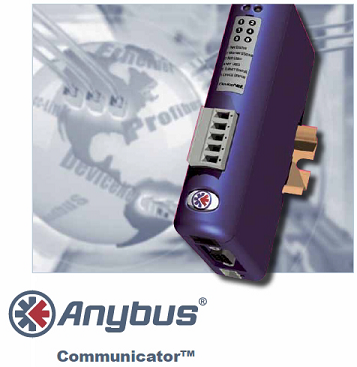 The Anybus Communicator can connect the Orion-M to a variety of fieldbus networks such as DeviceNet, Profibus-DP and others. The Communicator performs as an intelligent converter between the Modbus RTU serial protocol of the Orion-M and the chosen industrial network. The translation between the serial protocol and the network is configured by using the free “ABC ConfigTool” provided by HMS.

This windows based software has an easy to use interface and requires no programming. All translations are easily configured via pre-defined functions. During configuration, you can define which and how much data shall be passed between the fieldbus network and the Orion-M using the FDC provided device file. In addition, it is possible for a single Communicator to be configured to connect multiple Orion-M’s to the same fieldbus network.

The ABC ConfigTool also provides the functionality to save the configuration into a file. This makes it easy for OEM manufacturers to upload pre-defined configurations for instant usage of the Communicator by their end customers. All that is required to take advantage of this connectivity option for the Orion-M, is the proper model of Anybus Communicator for your fieldbus network, and the Orion-M’s user communications interface, an RS-485 (FC5A-SIF4) communications card that must be installed on the Orion-M’s control module.

Connecting the Anybus Communicator to the Orion-M

The Anybus communicator provides a DB-9, female serial port for connecting to the Orion-M. In order to use this connection, a cable must be made to connect pins 8 and 9 of the serial port to the Orion-M using a single twisted-pair cable. If multiple Orion-M units are to be connected to a single fieldbus Communicator, the cable is then daisy-chained from one Orion-M to the next.

Return to the Top of page